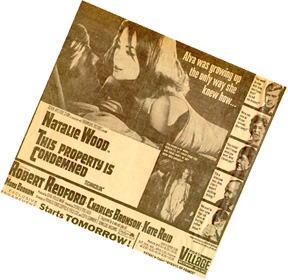 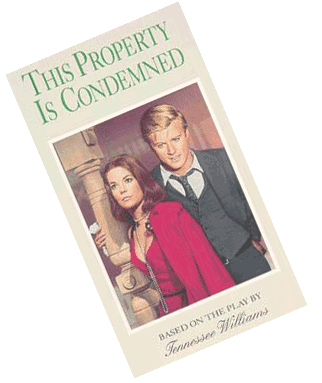 John Harding, the movie star, called “Jack” by his family, is not to be confused with his son, the coauthor of Escape from Paradise. The two John Hardings were nothing alike, which enabled them to enjoy each other’s company. You may not have heard of Jack, even though he was in thirty-five movies, but if you met him, you would know you were in the presence of a star.

Jack was nothing like John. Jack spoke with a cultivated theatrical accent. His mannerisms, while masculine, bordered on the foppish, something from the Noel Coward era.

On the Set With Natalie

Jack’s career in films started with a very small part in a movie written by his wife, Isobel Lennart, Love Me or Leave Me. This was followed by a succession of equally small parts in about thirty films, many of them also written by wife, Isobel. Finally, Jack got a featured role in This Property is Condemned, playing a dopey railroad conductor, in which he loses Natalie Wood to Robert Redford—surprise!

Television reruns have stretched Jack's fifteen minutes of fame into a lifetime.

May Chu met Jack on her trip with John to see what life would be like in America. Jack’s favorite restaurant was a place called “Alberto’s.” It was on Melrose, just outside of Beverly Hills, and a million miles from Singapore.

A tall, thin, white-haired headwaiter in a tuxedo stepped up quickly to meet us. “John, so good to see you,” he said, meaning, of course, John's father. As we were ushered to the table, the pianist stuck up the chords of “The Way We Were.”

“Oh, God, they're playing my theme song,” said Jack as he slid slowly into the booth.

“Your theme song?” I asked, taking the bait.

Jack arched a jaded eyebrow, “It's from that dreadful movie that Ray Stark made about Isobel and me.”

“Yes,” John chimed in with an irreverent chuckle, “Robert Redford played Dad, and Barbra Streisand, Isobel. How could Robert Redford ever hope to play Dad?”

Jack made no response, but looked away with a bored-you'd-better-please-me face. 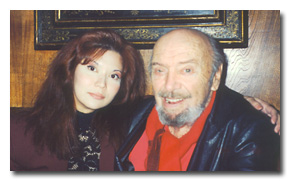 Apprehensive May Chu with Smiling Jack

Thanks to Joan
(what are best friends for?)

It was a lucky break that May Chu had the chance to travel to America, thanks to her best friend, Joan.

I had many reasons to visit the States. Since John and I would probably wind up there, I needed to find out all I could about the place. I wanted to check the schools, see about getting a divorce there, and get an idea of where we might live. I told Hin Chew that Joan had asked me to go to Chicago with her. Surprisingly, he thought it was a good idea. 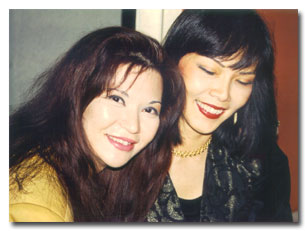 May Chu & Joan in America

While we are talking Hollywood, here are the films of Isobel Lennart.

On her trip to see if she could live in America, May Chu met...
The Movie Star 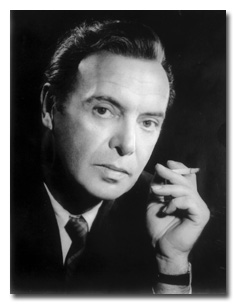